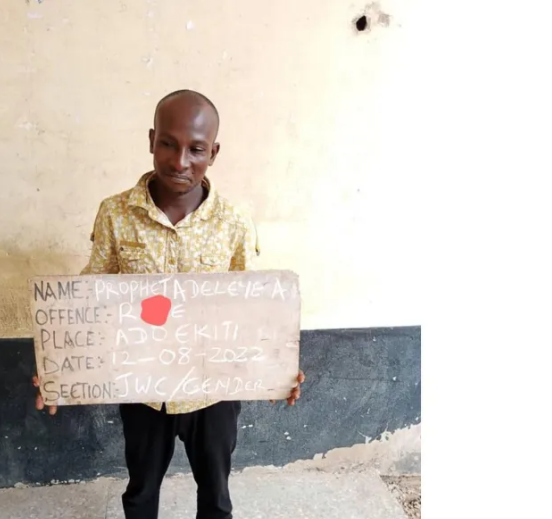 A  45-year-old prophe identified as Adeleye Akingbaso  who allegedly r@ped a minor  in Ekiti State has been remanded in the Nigeria Correctional Centre.

In his ruling on Wednesday, the Chief Magistrate, Olu Bamidele, ordered that the suspect be remanded at the correctional centre pending the issuance of legal advice by the Director of Public Prosecutions.

Disclosing what transpired, the victim in a statement tendered in court said: “The Prophet is my mother’s friend, he used to sleep in our house. On that day, my mummy left for night duty, but the Prophet slept in our house. In the midnight, he woke me and said I had bedwet, I said no.

He gave me shea butter and salt to rub my private part, I did as he directed. When I woke the second day, I saw him beside me and discovered that I have been r@ped. He warned me not to tell anybody, because I will run m@d.

He came back the third day, he said, he wanted to renew what he gave me earlier by having s#x with me. I ran out of the house and informed our neighbours.”

Spokesperson of the command, DSP Abutu Sunday, in a statement on Thursday, August 18, said the Juvenile Welfare Centre (JWC) Unit of the State CID, arrested Akingbaso, at Ijadu Olorunsogo, Ado-Ekiti, on August 12.