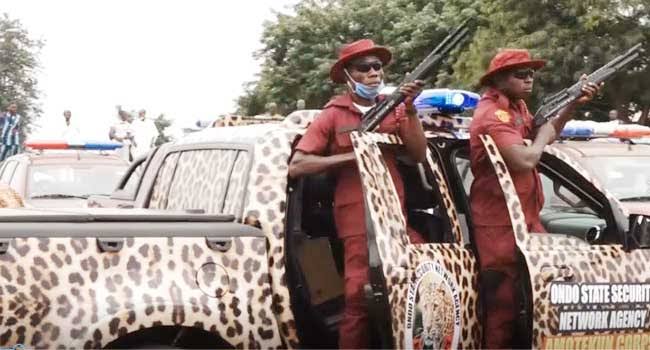 The ogun state command of The Amotekun Corps  has arrested seven suspected Indian hemp sellers while fighting over customers in Ogun State.

DAILYGISTHUB gathered that the arrested suspects are also members of Eiye and Aiye cult groups.

The Amotekun Commander in Ogun, David Akinremi, identified the suspects, who are all men between 25 and 40 years, to include: Alimi Raimi, Ayotunde Onakoya, Ogunmade Seun, Ayodele Oreoluwakintan, Taofeek Shita-bay, Ibikunle Gbengas and Ebiruga Oluwaseun.

Akinremi disclosed that they were nabbed in connection with a case of conspiracy and cultism.

According to the retired police commissioner, one of the suspects, Ebiruga Oluwaseun, on August 6 reported to operatives of the Corps in Ijebu North East Local Government while on surveillance patrol that, the first suspect, Alimi Raimi and one Ola (A.K.A. Ebony) had threatened to kill him.

The death threat, according to him, was over the supremacy rivalry as “members of a drug syndicate dealing in the sale of weeds suspected to be Indian Hemp and other illicit drugs.”

Akinremi said the rift between them began after Oluwaseun reportedly claimed seniority in the drug business, accusing the first two suspects of snatching his customers.

This, he said, led to a free-for-all that attracted the attention of the Amotekun Corps operatives.

He added that all the suspects were arrested at different locations in the town.

“Upon interrogation, they all admitted being members of Eiye and Aye Cult groups, who had been involved in the several killings of rival cult members in Ijebu Ode, Sagamu and Ijebu-Igbo.

“They also admitted membership of the drug ring in the area.

“Items recovered from them include, a UTC axe, cutlasses and some criminal charms,” it was said.