A 21-year-old Nigerian student identified as Muhammad Lawal, has written an open letter to billionaire and owner of Twitter, Elon Musk. 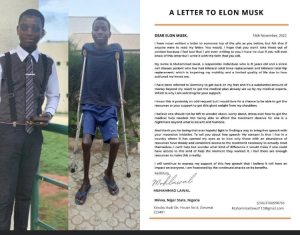 Lawal went on to reveal that some experts in Germany have said they would be able to help but he can’t afford the cost, which is why he needs the help of Musk.

To Musk he wrote, “I have been referred to Germany to get back on my feet and it’s a substantial amount of money beyond my reach to get the medical plan already set up by my medical experts, which is why I am soliciting your support.

About Manuel Santibenez 869 Articles
Manuel Santibenez is the Editor and Publisher of Daily Gist Hub. A native of Kwara state and a Christian by faith. He bagged his Diploma Certificate in Public Administration at the Ogun State Institute Of Technology Igbesa. His networth is estimated around $10k