Infamous Social media critic, Daniel Regha, has taken to his platform to share his thoughts on the news of popular Billionaire heiress, DJ Cuppy, saying Yes to her Boyfriend, Ryan Taylor just 25 days after they started dating.

DJ Cuppy officially announced her engagement last weekend after news made the rounds that her man had been with some other girl few days before he proposed to her.

The gist elicited speculations that Ryan wasn’t totally faithful to Cuppy but an unbothered Miss Otedola later took to her social media page to state that the perfect love story is cliche.

She also used the opportunity to announce her engagement as well as reveal that they’ve been together for just 25 days before she said YES to his marriage proposal.

This did not seat well with Daniel Regha and he has described her action as a desperate one. He also advised her not to marry Ryan Taylor yet. 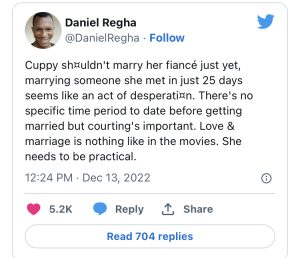