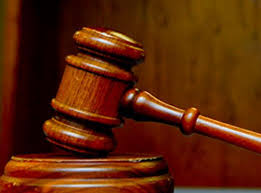 Ibrahim, who was involved in a cyber crime known as Yahoo-boy, had on Friday appeared before a Magistrates’ Court sitting in Abeokuta, the Ogun State capital.

DAILYGISTHUB had earlier gathered that a 23-year-old girl, Temilade Olabanji, said to be the suspect’s girlfriend, started barking like a dog after she was hypnotized by her lover.

The girl, in a viral video recorded in a police cell, stripped herself as she barked uncontrollably.