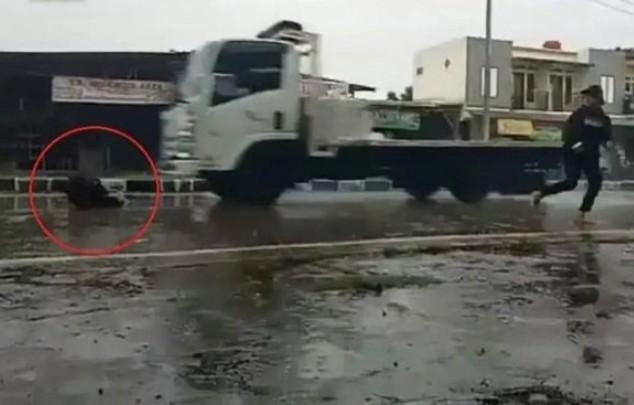 Some Indonesian teens have reportedly been killed as a result of a new social media trend that involves jumping in front of moving lorries.

The risky challenge, dubbed “challenge malaiakat maut” (angel of death challenge), is gaining popularity across the Eastern part of the Asian continent, with participants filming themselves attempting the deadly stunts in Tik Tok.

In Tangerang, Banten, an 18-year-old was killed instantaneously after he and two of his friends rushed in front of a moving truck in an apparent attempt to stop it.

The teenager reportedly died on the spot while his friends managed to avoid the vehicle and only suffered injuries. He collided with the truck, rolled under the moving lorry and was crushed to death.

This comes after a 14-year-old fractured his skull and shattered his teeth after being struck by an HGV as he and a friend attempted to perform the same stunt.

Locals have reportedly tried to persuade teenagers not to endanger their lives by participating in the challenge, but their appeals have largely gone unheeded.

In related news, a woman is suing TikTok after her daughter died while attempting a viral challenge she saw on the app called the “blackout challenge.”

According to the Pennsylvania mother, Tawainna Anderson, her 10-year-old daughter choked to death after taking part in the risky social media challenge, and she has filed a wrongful death lawsuit against TikTok and its parent company, ByteDance.

In the lawsuit, Tawainna Anderson said her daughter, Nylah Anderson, participated in a ‘blackout challenge’ after it appeared on her ‘For You’ page in December.

The ‘blackout challenge’ urges users to try to hold their breath until they pass out, according to the lawsuit, which was filed in the Eastern District of Pennsylvania on Thursday.

In December 2021, Anderson rushed her daughter to the hospital after finding she passed out.

The 10-year-old spent nearly a week in a pediatric intensive care unit before she died from her injuries, the lawsuit said.

Tawainna Anderson accused TikTok of having a ‘defective design,’ and that the company’s algorithms are exposing young children to dangerous ideas.