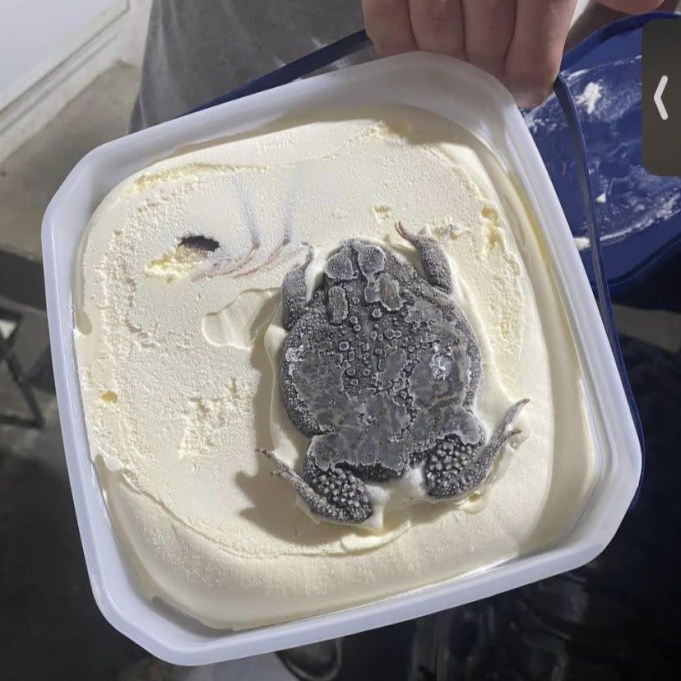 A lady has gone viral in he r  Facebook page after sharing a picture of the huge frog she discovered inside a bowl of ice cream she bought from a store.

The lady with username, Tracy Wiemelt Holtman revealed that she bought the Blue Bunny ice cream and it was sealed. However, after it was opened, a frozen frog was found just under the cover.

She disclosed that she believes the store bought it from the factory that way because the seal had not been tampered with.

She then went on to add that she will be returning the ice cream to the store. Here’s what she wrote on her Facebook page,

So I literally just bought this blue bunny ice cream from hyvee. Morgan opened it tonight and look at what was in it. This has to come from the factory this way bc it was sealed. Guess I will be taking back to the store bc they won’t believe me if I just tell them.

In other unrelated news, a young Nigerian lady made a video of the “epic fail” she suffered after she decided to listen to the whisperings of the devil on what she should do to her hair.

The lady, identified as Naomi, who is a beauty content creator, was documenting a process of styling her hair but little did she know an action she took was going to leave her partially bald.