An  ND1 student of the Ogun state institute of technology Igbesa from the business administration department Identified as Teslim Aishat Bisola  has allegedly stabbed her female roomate who is a student of Mass Communication department over her attitude in order to justify her righteousness towards her mother. 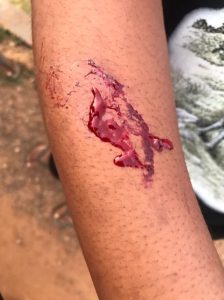 According to an eye witness who told  rounaround news correspondence that Teslim Aishat Bisola had been going out on several occasions to her boyfriend hostel which seems to be appropriate to them as friends.

It was revealed that bisola mother have being calling her friends to check up on her time to time, which the friends have being playing along to cover her dirty secret not untill they couldn’t stand the act anymore. 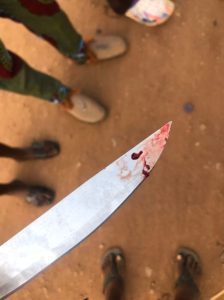 At exactly the early hours of Sunday 11th of December, Bisola took a fight on her friends for not being able to cover her act as her friends tend to open her doings to her mother as she call as usual to check up on her.

Bisola took an aggressive fight on her friends, and she stabbed one of her friend on her hand after receiving a phone call from her mother concerning her new behaviour.

It was also gathered that, Bisola targets her friends neck but mistakenly the knife hit her friend hand.

It was revealed that, immediately after the incident Bisola took a bike and ran away from the hostel.