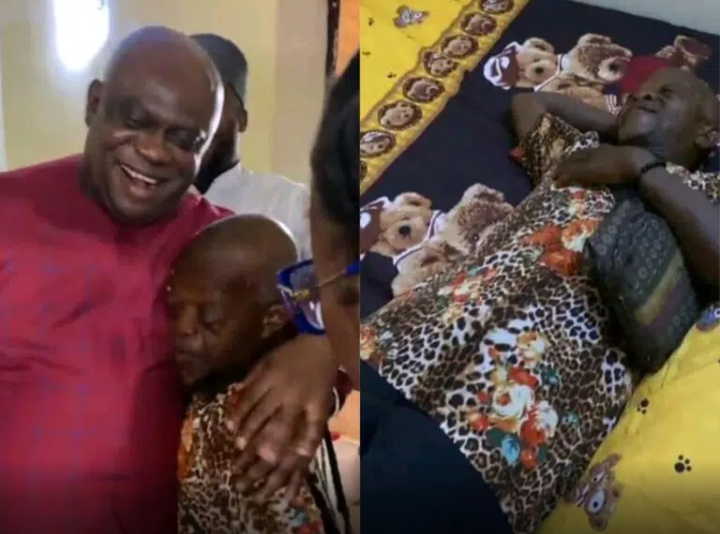 The General overseer of (OPM), Apostle Chibuzor Gift Chinyere seems to be considering retracing his steps from transforming Kenneth Aguba and returning him back to the trenches.

Since having his life transformed, Kenneth Aguba has been making unnecessary demand which has left the Apostle displeased.

Apostle chibuzor disclosed that he had offered to give Kenneth Aguba a wife as his old age made a lot of ladies and women turn down his proposal, however, the Nollywood veteran was being selective and is preference is a virgin lady from isreal.

“His life was disorganized. What I want to do is to rearrange his life, to help him achieve all the things he couldn’t all this years in Nollywood, I want to help him achieve it. He has no wife, no children. Now, I called the widows under my care who I gave free houses and scholarships to their children but none agreed to marry him except only one woman who accepted. Others said the man is too old. The woman said, I can stay with him, then we can open business and run it together and have kids together. But he’s saying he doesn’t want that. So, I want the whole world to see that what I promised. I even went ahead to do more.

I gave him full furnished house.

I gave him fully furnished house
A wife. I will pay the bride price, I will do the whole wedding,I will invite the actors in Nollywood, it’s going to be a big wedding.
Start a business for them.
Since he’s a comedian, I will assist him in getting some actors, do a movie and make him the prime actor of the movie. That will make him go back to Nollywood again.
But if he decline, if he doesn’t accept this, then there is nothing else I can do. I will just give you people transport to take him back to where you pick him up from.
He said, he wants to marry a virgin from Israel… I’m going to bring a doctor. He will rehabilitate his brain because poverty can make somebody run mad. And also, during the process of rehabilitation, we’ll be praying for him”.

Following the viral pictures of Aguba’s condition, Apostle Chibuzor reacted via his verified Twitter handle, offering to accommodate and feed the embattled actor.

The cleric wrote, “Who knows the contact of this actor, should tell him to contact me immediately.

“Instead of him sleeping on the streets, I, Apostle Chibuzor Chinyere, G.O of OPM, is giving him free accommodation in one of the OPM free estates. With free feeding.”

He later kept to his promise, hosted the stranded veteran actor and offered to give him free houses, and feeding in Port- Harcourt.