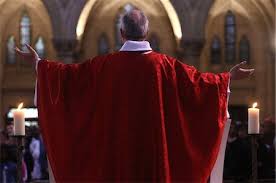 A video has gone viral on social media where  a Catholic Priest turned back members from the church because they didn’t have their Permanent Voter’s Card (PVC).

In the clip, the clergyman said;

AS I told you last week, Today if you do not have your PVC with you, you will not attend mass here today. When i said it, some of you took it for granted as if I was joking.

We have already discussed this with the school authority that any student who does not have his/her PVC will automatically get a carry-over.

If you are coming for mass, carry your PVC, if you don’t have PVC, don’t bother to come. We cannot have Christians fill the church but during elections, only a handful of them will go out to vote. So this is a serious issue.

The Catholic Priest only allowed members with PVC to enter the church premises to celebrate mass and he told those without PVC to go back home.