The industrial design student hanged himself in his room at an off-campus guesthouse in the Aule district of Akure city using buckets.

His body was found in the early hours of Saturday, January 21, after his close friends forced his room door open.

According to sources, his friends were uneasy when he failed to answer his phone calls and refused to open the door despite repeated knocks at his door.

“Upon gaining entry, his body was discovered hanging with the buckets used to aid his legs.” the source revealed.

Although the reason for his action was not yet known, students in the area where he resided suggested that it may be related to his struggles with depression and money problems.

The event was verified in a statement by Jesunifemi Asoore, president of the students’ union, FUTASU. 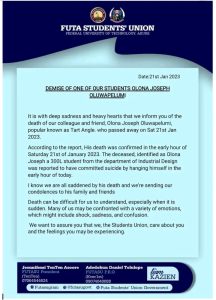 Spokesperson of the State Police Command,Funmi Odunlami, also confirmed the death in a statement.

“His body had been taken to the morgue, and investigation has started to unravel the reasons behind his action, but it was a case of suicide,”he said.