The presidential aspirant of the African Action Congress, omoyele sowore has blast his fellow contestant from the people Democratic Party , Atiku abubakar that he is a political hustler and scammers claiming he and the former president of Nigeria Olusegun Obasanjo privatized public companies during Obasanjo presidency 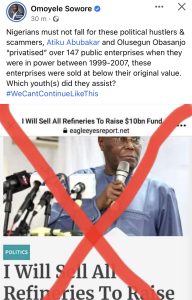